In 2015, Queen City Pride purchased and installed Pride flag streetlight banners to cover Regina’s downtown in rainbows. Like many cities and towns, banners on streetlights or across major roads are a way to celebrate festivals and important cultural events.

For Queen City Pride, the banners serve not only as a way to signal that Pride is upon us and a way to celebrate Pride Month in our city but also as a symbol of our 2SLGBTQIA+ communities and as a way to bring visibility to our presence. By placing banners along some of Regina’s major roadways like Albert St and Broad St, we’re able to draw focus to the Pride movement each year and help elevate our communities.

In 2020, the Streetlight Banners were updated so that each banner displayed some of the many different flags that represent the unique segments of our community.

In 2021, Pride flags were installed on the Albert Street Memorial Bridge for the first time in the history of the festival. 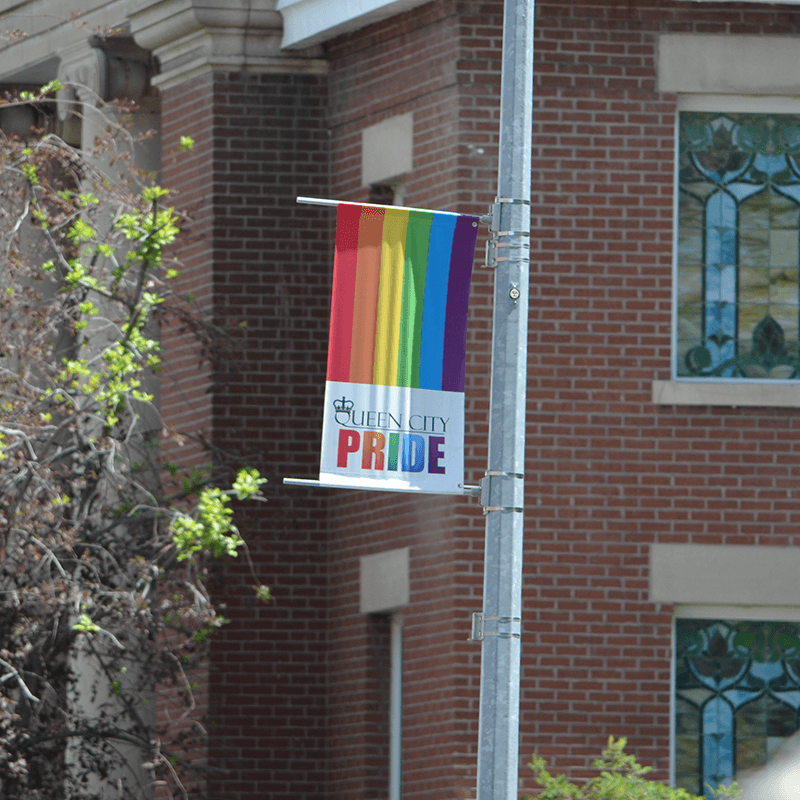 After five years, our original set of banners have become worn and weathered and it’s time to replace them. But we wanted to do something different with our banners. This time, our goal is to bring visibility and recognition to the many “Pride” flags that represent different sexual orientations, gender identities, cultural connections to Pride, and the evolution of the modern-day Pride movement. Although there is an evergrowing number of flags to consider, we selected 10 Pride flags to feature this year and going forward during Pride Month.

To help kick-off the 2021 Queen City Pride Festival, organizers set out to explore the possibility of installing Pride flags along the Albert Street Memorial Bridge. In a similar approach to the 2020 streetlight banner refresh, 10 different flags representing parts of the 2SLGBTQIA+ community were chosen for the project. This is believed to be the first time that Pride flags have been flown on the bridge. The Albert Street Memorial Bridge played a role in the first pride marches where our community would cross Wascana Creek to reach the Saskatchewan Legislature. In 2021, the Pride Parade will once again travel across the bridge, this time adorned with symbols of our community.

The term two-spirit was created in 1990 at the Indigenous lesbian and gay international gathering in Winnipeg, and “specifically chosen to distinguish and distance Native American/First Nations people from non-Native peoples.”

If you search “Two-Spirit Pride Flag”, you may come across two designs; one with a feather and one with the medicine wheel. Queen City Pride was informed that feathers were less relevant to our local Indigenous communities and that we should use the medicine wheel version. 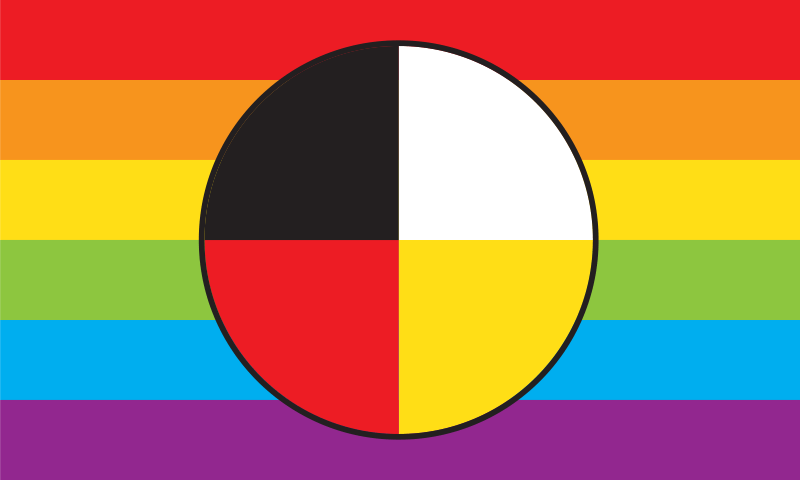 The most prominent flag designs to represent the Transgender community is known as the “Transgender Pride Flag” which is a symbol of transgender pride and diversity, and transgender rights.

The Transgender Pride Flag was created by American trans woman Monica Helms in 1999, and was first shown at a pride parade in Phoenix, Arizona, in 2000.

The flag represents the transgender community and consists of five horizontal stripes: two light blue, two pinks, and one white in the centre. 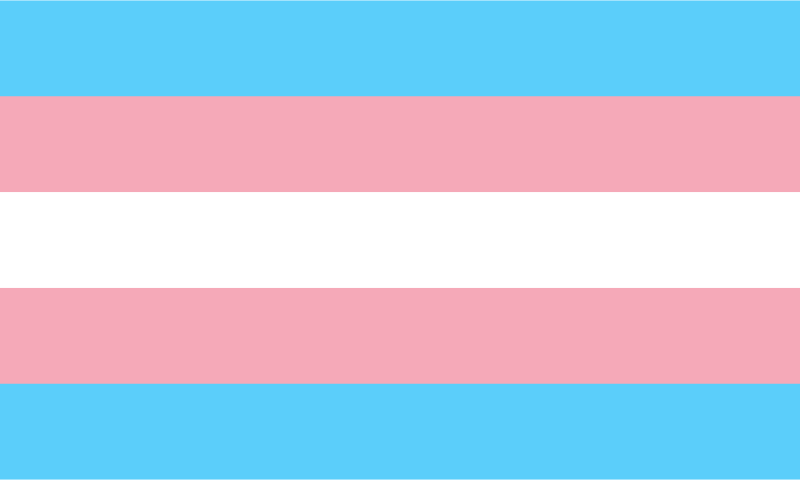 The Bisexual Pride Flag was designed by Michael Page in 1998 to provide the bisexual community with a visual identity comparable to that of the Pride Flag of the larger LGBT community. 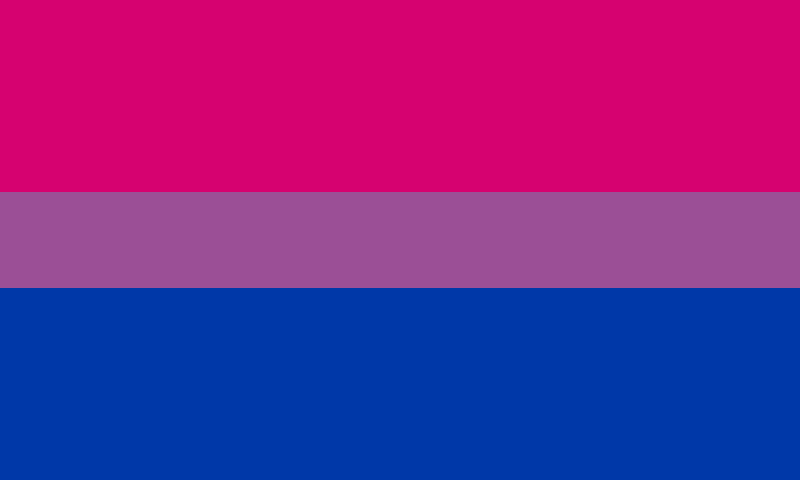 The Intersex Pride Flag was created in July 2013 by IHRA (Intersex Human Rights Australia), and is the flag commonly used for intersex representation during pride celebrations worldwide.

The intersex pride flag utilizes yellow and purple, which are considered “intersex” colours by the organization. According to IHRA, the purple central circle is “unbroken and unornamented, symbolising wholeness and completeness, and our potentialities.”

In 2009, AVEN (Asexual Visibility and Education Network) members participated in the first asexual entry into an American pride parade when they walked in the San Francisco Pride Parade. In August 2010, after a period of debate over having an asexual flag and how to set up a system to create one, and contacting as many asexual communities as possible, a flag was announced as the Asexual Pride Flag.

The flag consists of four horizontal stripes: black, grey, white, and purple from top to bottom. The black stripe represents asexuality, the grey stripe represents the grey-area between sexual and asexual, the white stripe sexuality, and the purple stripe community.

The Non-Binary pride flag was created by 17 year old Kyle Rowan in February of 2014 when a call was put out by several members of the non-binary community for a flag that could represent people who did not feel that the Genderqueer Pride Flag properly represented them. The flag was intended to go alongside Marilyn Roxie’s genderqueer flag rather than replace it. 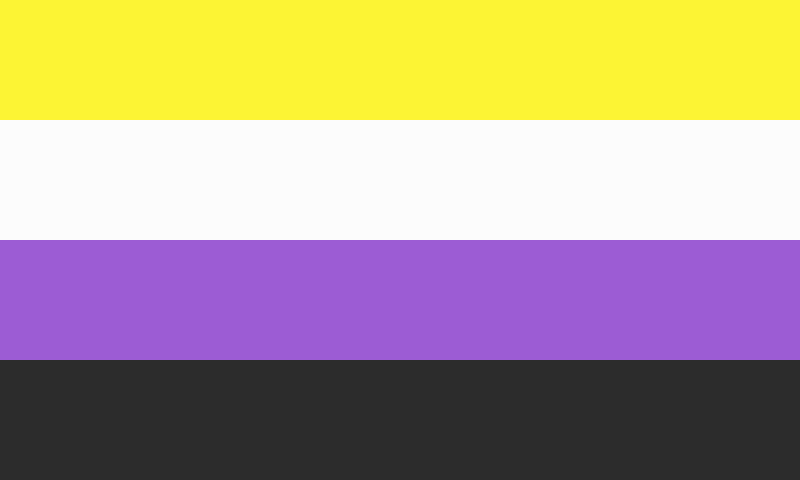 The most recent interpretation of the Pride Flag, The Progress Pride Flag, was designed by Daniel Qausar of Portland, and is a combination of the traditional six-colour flag created in 1979, the white, pink, and light blue colours of the Transgender Pride Flag, as well as the brown and black stripes that were added by the Philadelphia People of Color Inclusive Flag, meant to represent people of colour and those lost to AIDS. The result is a fully inclusive flag intent on representing the most marginalized communities as well as the evolution of the queer community as a whole over the past several decades.

Learn more on them. 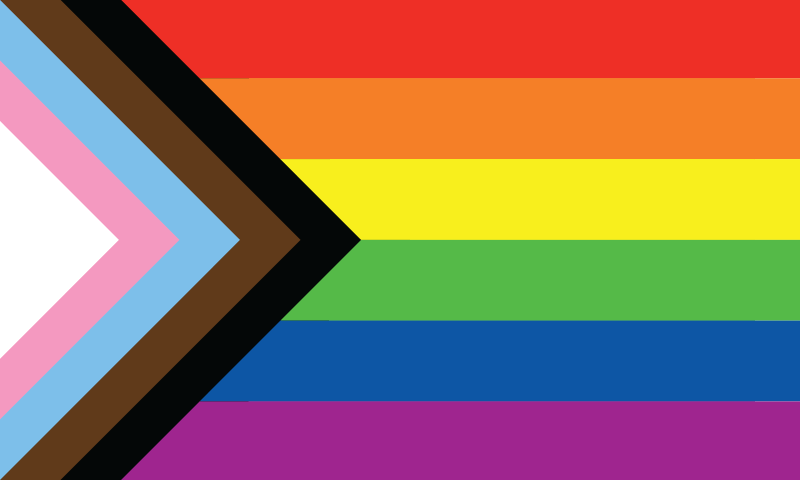 The Genderqueer Pride Flag was created in June of 2011 by Marilyn Roxie in an attempt to represent all non-binary and genderqueer people. However, as the genderqueer community grew the flag became synonymous with the term “genderqueer” and a separate flag representing non-binary communities was created later on.

The Genderqueer Pride Flag has three stripes coloured (from top to bottom) purple, white and green. Chartreuse green represents those outside the gender binary as it is the inverse colour to purple, the combination of pink and blue (traditional male and female colours). The white stripe represents agenderness and gender neutrality. The third stripe is purple, to represent those whose genders are of, between, or a mix of female and male. 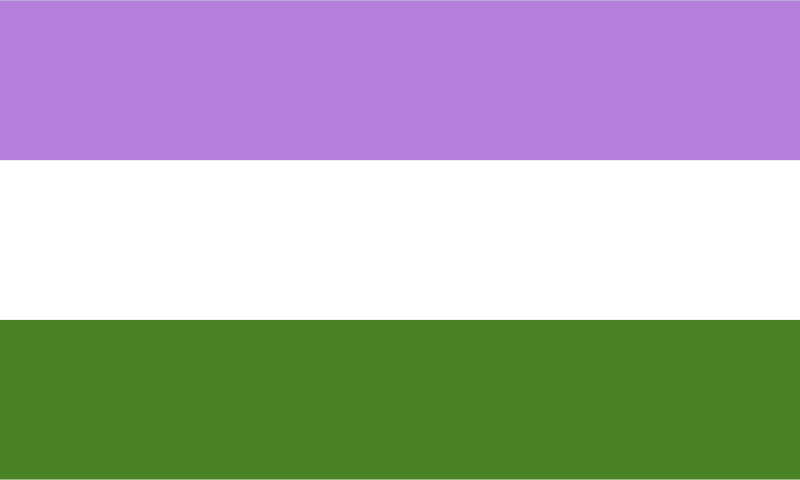 The flag seen here was created in 2018 and has been voted by thousands of members of the lesbian community as the most recent visual representation of the Lesbian Pride Flag.

Sometimes this red / pink variant features the addition of a lipstick mark in one corner and is flown to celebrate the subculture of Lipstick Lesbian, members of which stick to a more ‘feminine’ image rather than taking a ‘masculine’ one. 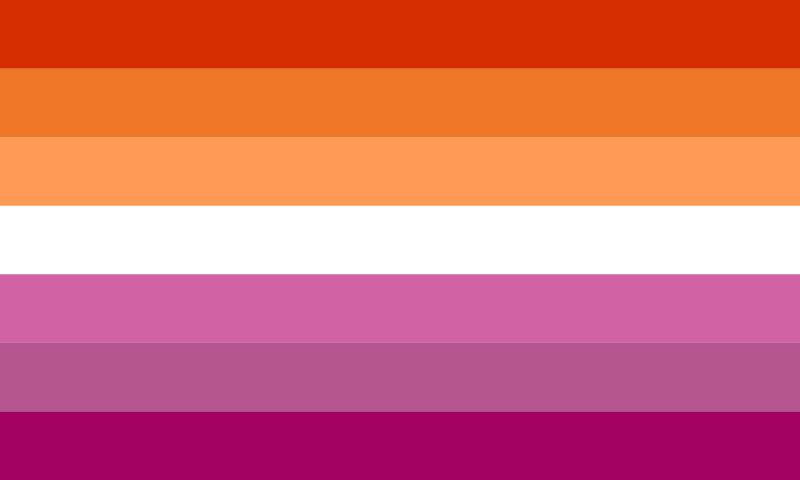